Somehow this one slipped by me, unremarked. Here’s an attempt to rectify. 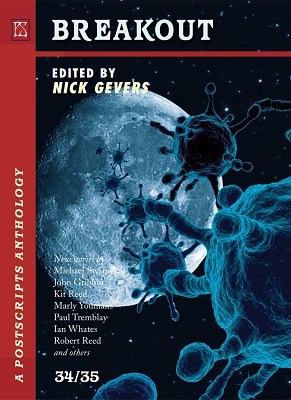 Lovely and talented author Steven Utley passed away January of 2013. At the time (and at his urging — he loved to collaborate) he and I had been working on two stories, long distance and in a highly sporadic fashion. We’d each emailed the other a story fragment well over a year earlier. Mine had originated after a visit to the Bastrop County, Texas museum, which used to be in a rinkydink little corrugated building sliding off the edge of a steep incline into the sandy bottomed Colorado River (which some summers in those parts is more of a Colorado Creek). Looks like they’ve found new digs since then. Steve added some amazingly insightful and gorgeous passages to what I’d written, making it a much better piece all round. He urged me to drive it into “Turn of the Screw” territory, and I think we did, by the end. I had to look up Henry James to discover what the hell he meant.

The fragment Steven sent me to work on was completely different. Like mine, it wasn’t originally based in any fantastical realm or premise. Also like mine the protagonist was a young woman venturing deep into unfamiliar territory. But though the first ended up playing more to the weird-fiction streak in both of us, the second piece seemed to be heading more in a mystery/crime direction.

Then Steven died rather suddenly. In a fit of what I suspect was a complex sort of grief I dropped everything else I was writing and threw myself into finishing the two stories we’d been working on. Maybe I felt I owed it to him to get these things out in the world as fast as I could. The museum fragment quickly grew into the very short story “All the Layers of the World.” This bit of surreal weird fic came out earlier this fall in PS Publishing’s Postscripts anthology, BREAKOUT.

The other story, a crime piece set in the Caribbean (my heritage!) ballooned under my intense Utley-driven writing spell into a novella-length caper of stolen money and quasi-prostitution and island kingpins.  My agent says the contributor copies have just hit her office in New York.  As soon as they get here, I’ll post a pic.