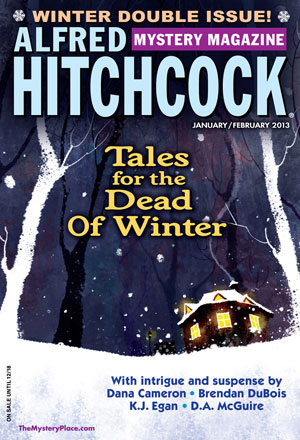 This double issue is perfect to warm up with this winter for readers of all types. In some places, it’s full of action, such as in S. L. Franklin’s “Raptors” (featuring PI R.J. Carr) and John M. Floyd’s “The Long Branch.” In other settings, such as Sanibel Florida, rural New Hampshire, and an upscale Boston jewelry store, the action simmers below the surface (procedural “Museum Man” by William Hallstead; twisty “Small-Town Life” by Brendan DuBois; surprising “Diamond’s Aren’t Forever” by Raymond Goree). If you’re a radio or film buff, you’ll enjoy Michael Mallory’s “White Lotus” and Terence Faherty’s “Margo and the Silver Cane.” And if you’re into science-fiction or fantasy mysteries, you won’t want to miss Jay Carey’s possible-future tale “We Don’t Call It Stolen Property” or Dana Cameron’s “Finals,” which follows some . . . alternative teenagers living in Salem, Massachusetts. The emotional stakes are raised in three tales that particularly explore all sides of human nature: “Light as Air and Death” by Camille Alexa; “Reconciliation” by K. J. Egan; and “The Dog Walkers” by D. A. McGuire.

No matter who is on your gift list this season, the January/February issue is sure to please.

[from the AHMM site]