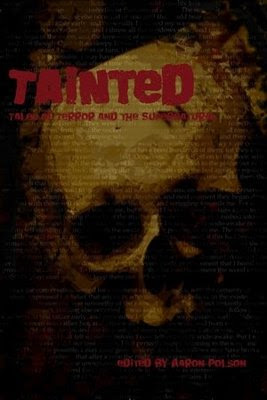 Strange Publications has revealed the cover for their forthcoming collection, Tainted:  An Anthology of Terror and the Supernatural, including my short story “Station Thirteen.”
This was an interesting project.  The call was to craft an updated, modern piece inspired by one of the following classic horror tales, all of which appear in the anthology:
“The Caterpillars” by E.F. Benson
“The Boarded Window” by Ambrose Bierce
“The Facts in the Case of M. Valdemar” by Edgar Allan Poe
“The Empty House” by Algernon Blackwood
“The Red Room” by H.G. Wells
Inspiration, strange as it is, struck me with what I thought would be the least likely of the above stories to grab my attention.  I don’t think I’ll reveal too much more about the anthology until I hear more from the editor, but it’ll be a total riot to share a ToC with the likes of H.G. Wells and Edgar Allen Poe.
Purchase info and full Table of Contents as they reveal themselves . . . .